Gambling on Twitch: It’s banned, but... 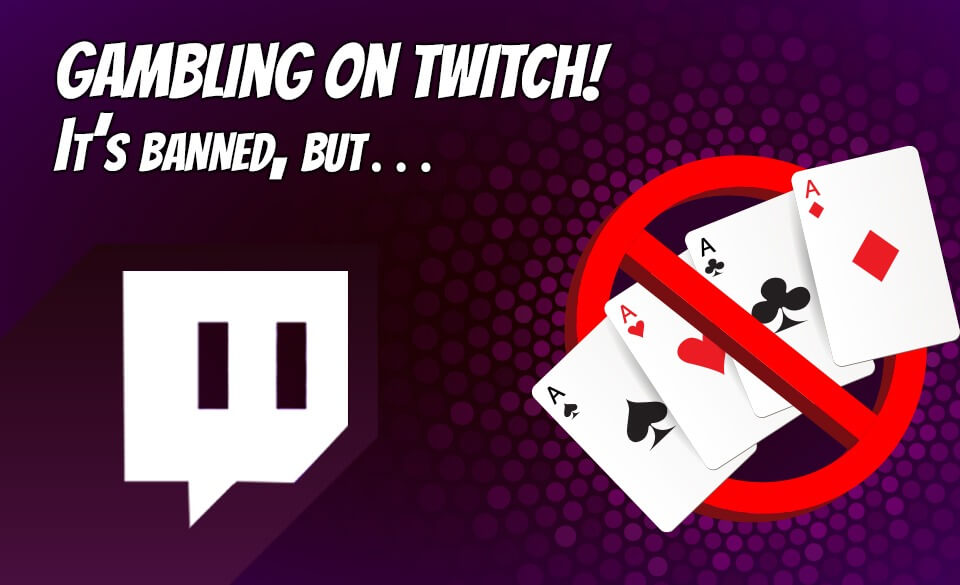 On this page
Gambling was one of the most sensitive topics on Twitch until 2022. But unfortunately, the administration turned a blind eye whenever content creators told about its harmful impact on the community.

According to Twitch stats, almost 75% of the audience is 18 to 34. And unexpectedly, Amazon, who has owned Twitch since 2014, remembered its global mission and tried to deal with gambling. Kind of. Cause this category in 2021 gained over 1.2 million followers and made lots of money for Twitch. 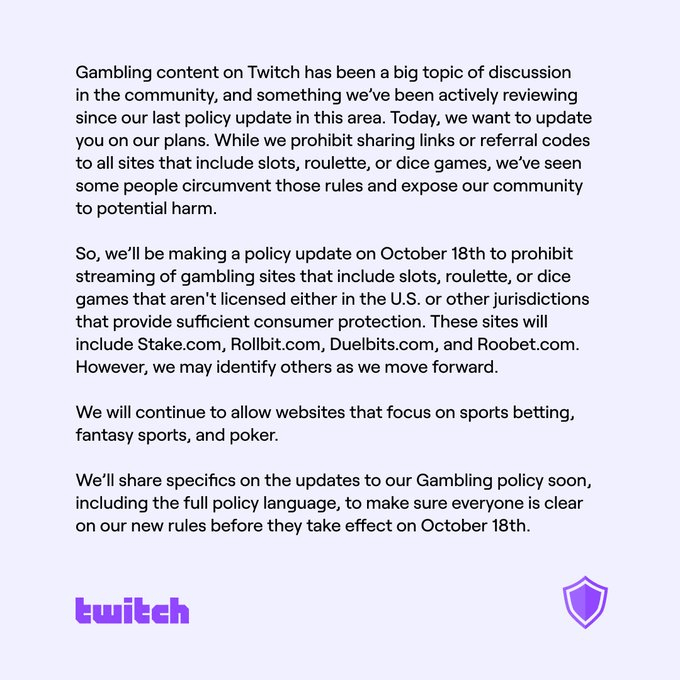 Lots of streamers thought that gambling was banned altogether. There were thousands of such messages from top-rated content makers: 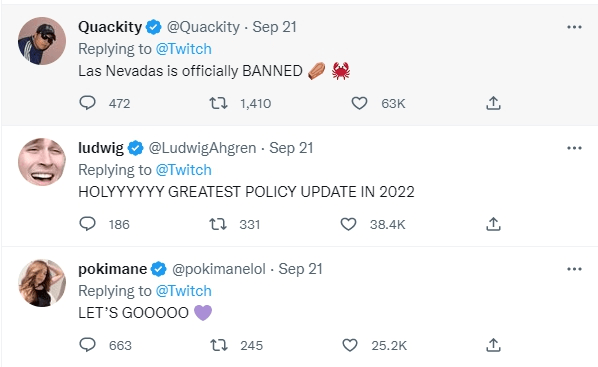 The community rejoiced. People saw the word “to prohibit,” and that was enough. But recognition came later. Cause gambling wasn’t banned, it was limited. That’s a tremendous difference. And now we’ll try to find out what that led to.

Gambling before and after

The history of gambling on Twitch was trivial. Cause slots, roulette, and card games were considered games with no restrictions. But there were not so many people streaming and watching such activities.

Until December 2018, the average online of slots was less than 20 viewers. For comparison, over 8000 people watched Minecraft streams, and there were more than 20k viewers at World of Warcraft streams then.

All changed when Twitch created new categories such as Casino, Slots, and Poker. In a month, the number of viewers online grown up to 12k.

But the game-changing moment was when top-rated streamers started streaming slots for their audiences. Gambling became really popular.

In 2019, xQc had over a million subscribers and was among the twelve most well-liked broadcasters on Twitch. In addition, he was the first top streamer who started streaming gambling activities regularly.

xQc became addicted really fast. In 2020, he was streaming slots of similar games in over 50% of his live broadcasts. Even when playing other games, he ended up making in-game bets. Just like that:

Bloomberg found that xQc’s wagers total over $685 million. And if it’s not the most potent advertising of gambling on Twitch, we have no idea what else it may be.

Slots and other gambling categories became common. So online casinos started to cooperate with streamers. If earlier content makers played slots cause they liked it, then later, 95% of these streams were sponsored by gambling websites.

It was ok when streamers played for fun, but everything changed. Streamers directly advertised gambling websites and offered new players promo codes and registration bonuses. But the bigger problem was fake wins.

To motivate users to gamble, casinos developed a dirty strategy. When a streamer becomes a partner, he gets a new account for gambling with a few times increased winning changes. And, of course, a creator didn’t play for real money; that also was fake. It was just a theater play to fool viewers.

Moreover, a streamer offers large bonuses and free spins for starters, and birdy is in the cage. It’s almost unreal to prove the fact of fraud cause any casino won’t reveal its code and account settings.

In 2021-2022 the situation was near catastrophic. Twitch became a tool for advertising casinos. No less. Cause in the second quarter of 2022, there were over 127 million watched hours in the “Slots” category. It’s almost three times more than in 2020.

Twitch was in a fire. Many top-rated streamers performed straight against slots and other similar games on Twitch. And even average viewers started complaining that there were too many gambling broadcasts.

It’s time @Twitch does something about gambling streams

So it happened. After lengthy discussions, the decision was made. But was it effective?

Twitch when gambling is “banned”

Alas, Twitch didn’t want to lose the gambling-loving audience, so they made a compromise solution. Gambling was limited but not banned altogether.

All official gambling websites under US jurisdiction were allowed.

On the one hand, it really helped cause all scumming casinos to be banned. Only adequate resources having straight winning chances remained.

After October 18th, when the limitation entered into force, the average online rate in the “Slots” category fell thrice. 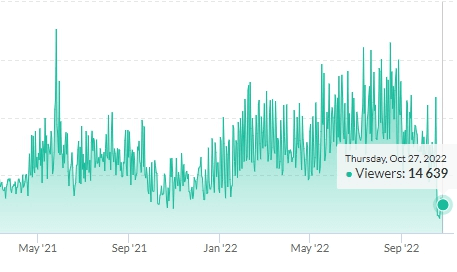 The popularity of the “Slots” category has fallen sharply. Now it’s in 31st place on Twitch. Two months ago, it was the 8th.

But on the other hand, policy changes didn’t solve the gambling problem on Twitch at all. Addicted gamblers may move to allowed platforms and continue losing money and promoting such kind of entertainment.

Moreover, these don’t prevent creating one-time accounts advertising unfair casinos. Because of the peculiarities of administration, such channels may be online from one to ten days. And even if they’re banned, it takes ten minutes to create another account.

All ads, promotional codes, and links to casino websites were prohibited.

And that was a good idea cause 9 of 10 streamers in the “Slots” category were promoting certain gambling websites. Moreover, there were hundreds of accounts created directly for such advertising.

But links to socials aren’t prohibited. Any streamer can legally address followers to Twitter, Facebook, or Instagram accounts and try to promote casinos, even banned ones, there. Also, a streamer may legally post links to informational websites.

For example, CasinoDaddy is one of the biggest streamers on Twitch, broadcasting slots only. And in his profile, we can see links to info websites and socials. And if someone digs deeper, it becomes clear that all promotional activities are just there.

This strategy works. Cause technically, streamers don’t have any forbidden ads on their pages. Socials and informational websites aren’t prohibited. So promotional activities became just one step longer but still effective.

The future of gambling on Twitch

Twitch doesn’t want to lose money from gambling categories, so slots aren’t banned completely. However, current policy changes are just the way to protect Twitch itself from possible charges and legal actions.

Even when gambling loses popularity, there is still solid ground for its coming back in the future. Casinos will deal with these temporary inconveniences in half a year. Sure, the category wouldn’t overgrow and be less often shown to users who aren’t interested in it. Also, Twitch wouldn’t recommend gambling streams on the main page.

But it’s clearly not enough to claim victory over gambling on Twitch. And it’s doubtful something will change in the future.

Up Next
Popular Free Streaming Platforms
Gambling, casino, and slots: the shadow side of Twitch
The most effective Twitch ad campaigns in the past 12 months
How to Stream PC games to Twitch
For brands