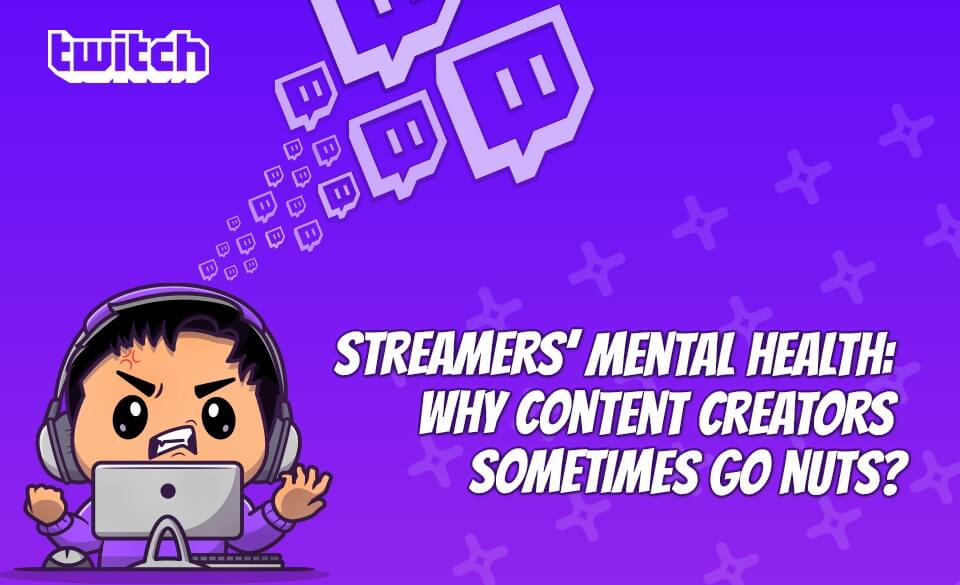 On this page
Streaming is not considered a dangerous job. It’s understandable cause most people reckon that the most threatening problem for a broadcaster is falling off the chair when gaming.

Well, it’s true for physical health if back pain doesn’t count. But sitting in front of the computer and speaking to yourself for 40 hours each week is dangerous for mental health. The pressure may be too much, even if a streamer has an everyday social life.

So today, we’re talking about mental health. Let’s find out why streamers go nuts and how to avoid it.

Is it really a problem? Well, yeah

We won’t keep the intrigue cause the situation is difficult but non-obvious. However, the problem does exist, and mental illnesses affect streamers more often than people think.

According to Twitch stats, there are over 8 million total active streamers. Sure, most of them stream rarely and don’t get more than 5 viewers simultaneously. Some broadcasters like being watched or want to share emotions with other people while gaming. But they spend too little time streaming and usually have a normal social life. So, in this case, streaming has no effect on mental health.

But over 51 000 broadcasters are Twitch partners. And they may be considered professional streamers cause they have established audiences, make content regularly, and get enough money to make streaming a full-time job.

Pro streamers spend in front of the cameras over 40 hours per week. Some of them broadcast even without days off. As a result, the streamer’s mind is tense, and the body gets no relaxation, so it may end up with mental illness.

Here are some reasons why:

Streamer’s mind is always turned on.

A broadcaster must speak all the time. Cause if not, he will be losing the audience really fast. But talking nonsense won’t work. His monologues should be interesting, involving, and funny. Even if he plays the most boring game ever.

It’s tough to speak for hours without a break. But people don’t see the underside. Cause popular streamers create scenarios for broadcasts. Yeah, they come up with involving activities, stories, and topics cause viewers must be entertained. Sometimes streamers hire a person or two who help them prepare for broadcasts, but most content creators do everything by themselves. So emotional burnout is a common thing for them.

A streamer is not like a hundred-dollar bill to please everyone. He must deal with dozens of haters if he has thousands of followers. And they can be really annoying. Cause streamers are creative people, so even one negative comment may spoil the mood and ruin the vibe.

Popular broadcasters are immune to this, but they have to deal with haters daily. Of course, that’s just words, but streamers often get messages like “Die, you stupid piece of shit.”

Recently, so-called “offensive donations” became popular. It’s when a person donates a little money to voice some insulting message aloud. Haters love seeing when a streamer gets angry or upset.

It primarily concerns female streamers, but some guys complain about it too. Fame is good on Twitch for making money cause the more people like a streamer, the more donations they send. But there’s the other side of it.

Finding the streamer’s home address or phone number is not challenging. However, even if admirers don’t up for something bad, they may be annoying and terrifying. Most streamers aren’t ready for this kind of attention and don’t know how to deal with it.

There are many cases when streaming girls contacted the police about stalkers following them everywhere.

Playing games seems to be the best job ever. But it’s only at first glance. Cause if a person spends so much time playing, the risks of suffering gaming disorders or addictions are sky-high. And it’s not a joke but a serious problem.

It affects social life, behavior, personal habits, and emotional reactions. A person often feels depressed and lonely, gets angry quickly, takes no pleasure from gaming and streaming, spent much money on in-game purchases. As a result, he loses followers and subscribers cause he can’t attract an audience as before.

It may even lead to more severe mental illnesses such as sсhizophrenia, persecution mania, or bipolar disorder.

By the way, almost all streamers in the “Slots” category already have ludomania which requires medical treatment.

Streaming is a complicated job with its hidden risks and troubles. But let’s be honest, who actually thinks about that before broadcasting starts? Nobody. Streaming seems fun and easy to earn money, and people don’t see what’s behind it.

Streamers who couldn’t resist it

Now we’re going to talk about streamers who couldn’t resist the tension. There are many cases when a streamer stops streaming and disappears from Twitch. And we are sure most of them are because of mental problems. But we have some issues that went public.

Meet xQc — the most famous gambling-addicted streamer on Twitch. He is #3 on the platform having over 11,2 million followers. He gets about 100k dollars a month just for paid subscriptions. According to various sources, in 2021, his monthly income was about 700k dollars, including direct donations, ad revenues, and brand deals.

But he loses enormous sums of money in online casinos. In May 2022, he run a podcast with another popular content creator Pokimane. And when she asked about gambling, xQc confessed that he had lost $1,85 million in a month because of gambling.

But it’s not all. Once, he lost two million dollars during a single stream.

xQc is addicted, and he knows it. He acts like a mentally ill person. In 2021 he tried to give up slots and even promised his subscribers that he would never return to gambling, but he failed. A month passed, and xQc began losing money again. He felt guilty and depressed but couldn’t withstand it.

Another thing is that he doesn’t want to get rid of the addiction. When his earnings allow him to gamble, it seems not a big problem. But he already has one of the most severe forms of ludomania, which needs urgent medical treatment. There are serious risks of consciousness disintegration.

Let’s take another famous streamer — Asmongold. He used to be in Twitch’s top 50 list having over 3,2 million followers. He started streaming in 2011, but in the past few years, he suffered from depression and nervous breakdowns. He told his viewers many times that he didn’t get pleasure from streaming anymore.

Asmongold earnings were about 300k dollars a month. And in 2022, he won the Streamer Awards in the “Best MMORPG Streamer” category. But even that didn’t save the situation.

He suspended his streaming career a few times to improve his mental health, but it didn’t really help. He could be offline for months but always came back. But in April, he said he would end up with Twitch and leave it forever cause he was dead tired from streaming.

And he kept his word cause the last time he streamed was in July 2022. Asmongold’s videos about the hidden side of streaming should be recommended to all newbie content creators. For example, here, he talks about parasocial relationships, and it’s exciting:

Asmongold has left Twitch but still has active Twitter, Facebook, and Instagram accounts where he contacts his fans. And actually, he seems happier and more confident since he abandoned broadcasting.

Streaming seems like a dream job for most beginner content creators. But it’s not. To become a pro and earn a lot of money, a person must work hard. But unfortunately, not everyone can cope with everlasting mental tension and keep entertaining the audience at a high level every day.

Everything changes when a streamer crosses a line where streaming becomes a full-time job. Many broadcasters break down when they realize that all they did for fun they had to do for a living.

So if you want to be a streamer, don’t cherish illusions that Twitch is the easiest way to earn money. Cause it’s definitely not.

Up Next
Best webcam software for streaming
Best video switcher for live streaming
How do raids work on Twitch?
Starting your first Twitch stream
For brands