Home Blog Streaming on not a top ten language on Twitch: chances to succeed

Streaming on not a top ten language on Twitch: chances to succeed 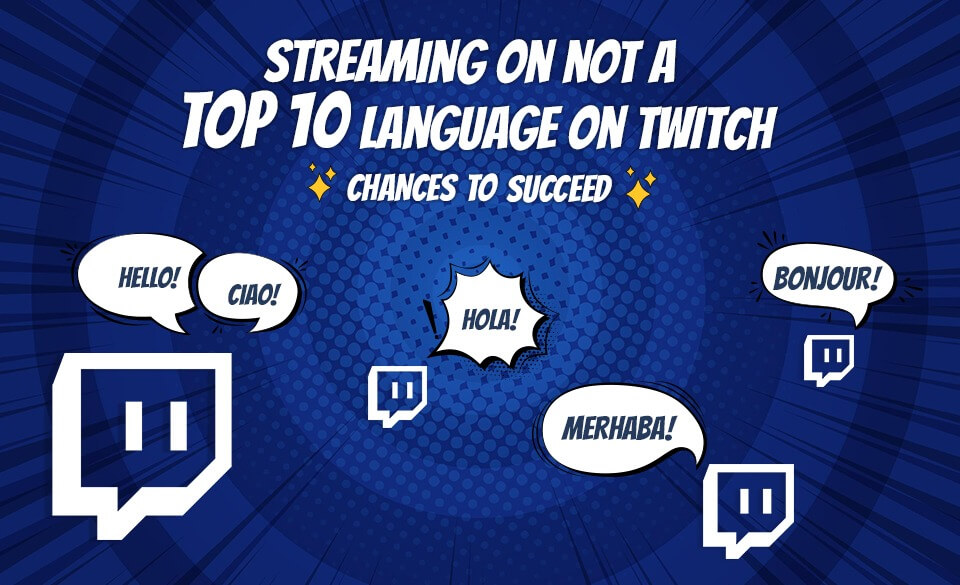 On this page
Twitch is an international streaming platform, so all languages are allowed and equal for broadcasting. But some of them gather much larger audiences than others, and that’s easy to understand.

For example, there are over 1500 million English-speaking people in the world. So it’s not weird that English is #1 on Twitch. 54,59% of channels on Twitch are in English. 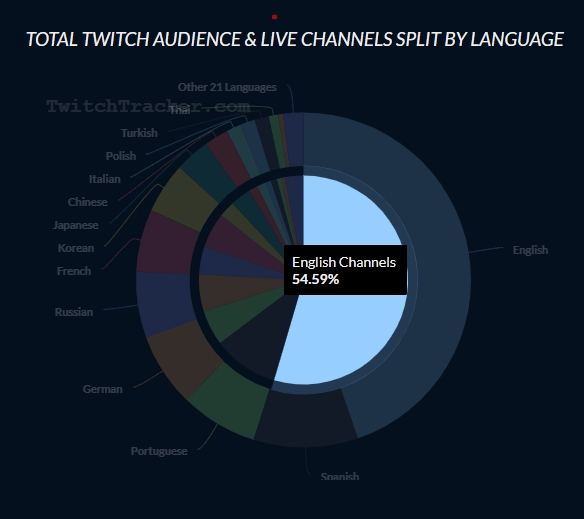 The more viewers a streamer can attract, the faster his channel grows. And the more a streamer earns, of course. But, at the top level, language does play an essential role on Twitch.

Let’s look at the languages the top 50 list streamers speak. Nothing unexpected, the most popular is English. 37 of 50 top-rated streamers use it. Spanish takes second place, having 11 Spanish-speaking channels at the top. Also, there are two streamers who speaks Portuguese and German. That’s all.

Isn’t it an indicator that other languages are useless on Twitch, and can’t a broadcaster reach a top level when streaming not in a leading language? Let’s find out.

A bit of statistical data

According to TwitchTracker data, there are the next the top 10 list of the most common languages on Twitch:

English is the undisputed leader. But what about other languages? The situation is interesting. Cause the second place is taken by the Spanish. There are five times fewer content makers streaming in it than in English. However, its audience is still huge — about 14 million active users monthly.

Moreover, 62 Spanish-speaking streamers have over a million subscribers. It means the market is still perfect for cooperation. The same applies to other languages from the top 10 list.

NB. Streamers, who run channels in one of the international languages, are usually more known than those streaming for just a single country.

For example, many viewers who don’t speak Spanish know something about auronplay or ibai. People even translate their clips into other languages. But only some people outside Italy have heard about POW3R, the #1 Italian streamer. He has over 1,5 million followers but is known in the local market.

English and Spanish have vast audiences, but it doesn’t mean that other languages are less profitable for content makers.

And here we come to languages that are less popular on Twitch. The top 10 list covers 94.07% of Twitch. It means the number of streamers who speak one of the remaining 26 languages is just 5.93%. Not so much, at first glance. But there is life.

Analyzing local languages: are they profitable for streamers on Twitch?

We’ve chosen two languages that are not on the top 10 list. Meet Turkish (#11) and Ukrainian (#21). Both languages aren’t international and are common only in Turkey and Ukraine.

Turkish-speaking users account for 1.36% of Twitch, having about 34k weekly viewers. Ukrainian ones are even less — about 0.2% with 3,2k average users weekly.

There are some differences. The Turkish market is stable and has a pretty low pace of development. But Ukrainian Twitch growths rapidly. Just in a year, it has increased five-fold. And that’s the point. Some local audiences on Twitch started to grow just recently. But now, they should be taken seriously as marketing tools.

Local markets have some critical features that should be considered by marketers.

6k viewers are not enough for a significant advertising campaign cause just a single mid-level English-speaking streamer gets more audience. That’s why Twitch is often used as an additional advertising tool but not the main one.

So let’s check streamers. Are there lots of Turkish and Ukrainian broadcasters making content full-time on Twitch and getting enough money for a living from paid subscriptions and advertising?

As it turned out, nine Turkish-speaking streamers have over a million subscribers. This is enough even for a nationwide advertising campaign. Moreover, there are more than 200 streamers with 100k+ followers. It would be easy to cooperate with 20-30 of them and create a massive promotional campaign for a local market. Furthermore, GetStream is already working with Turkish streamers, so brands don’t need to negotiate with each streamer separately — all agreements are already made. So, even if the language takes just 1% of the Twitch audience, it’s still decent for promotional activities. Moreover, Twitch may be the only tool for a particular advertising campaign.

As for the Ukrainian market, the situation is a bit different. There is no streamer having a million followers. Moreover, the four places in the top 10 list are taken by Ukrainian branches of international cybersport teams. Just five content makers passed the 100k mark.

But nevertheless, Ukrainian Twitch has a decent amount of mid-level streamers having 10k+ followers. So they may be used effectively for promotional campaigns. But the problem is that 80% of Ukrainian content makers on Twitch do it part-time. They go online not every day and just for a few hours a day cause they don’t get enough money for a living from Twitch only.

For example, #3 on Ukrainian Twitch has about 200 active subs. It meant that he earned from paid subscriptions just about 100 dollars monthly. The price of tier-1 sub in Ukraine is just 90 cents.

This also indicates that Ukrainian streamers are more than open to cooperation with brands cause it’s the only way to earn money and keep streaming. In addition, streamers have small but active audiences, so advertising some local goods or services may be profitable. The only problem is that running an extensive promotional campaign takes time. It’s because most streamers don’t have any marketing kits, and the communication process with them may be up to a week or even more.

It’s the same with other Twitch segments speaking on languages outside the top 10 list. Markets are growing but still small; streamers have few followers but are always open to cooperation. Creating an advertising campaign takes a lot of time. Still, it may bring significant results because only some brands use Twitch as a marketing tool. So national brands should draw attention to the Twitch streamers who speak local languages. Their marketing influence is still underestimated.

Up Next
Best audio mixers for streaming
Gambling, casino, and slots: the shadow side of Twitch
How to start a test stream on Twitch?
How to stream on Discord
For brands