TwitchCon 2022: how went the main offline event for streamers 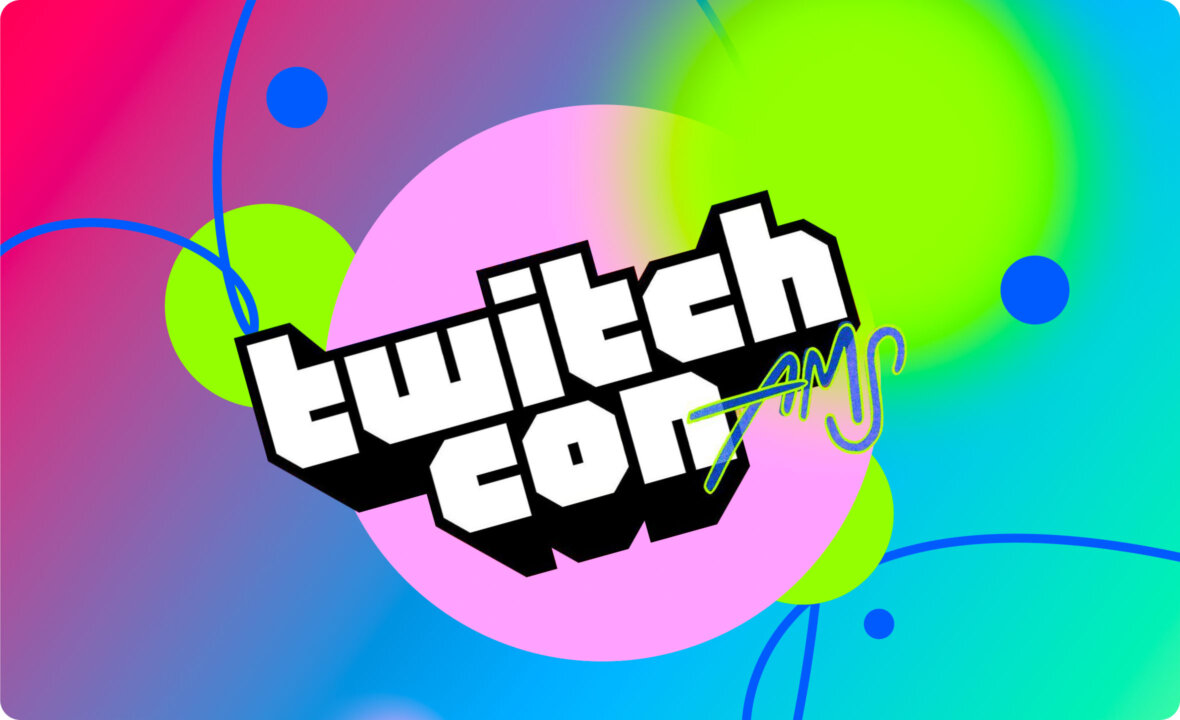 On this page
Hey, TwitchCon is back after two years of absence. In 2020 the festival went online because of COVID-19 pandemia, and a year later, it was canceled.

But now, the main event for Twitch fans and streamers is returned.

TwitchCon 2022 was held in Amsterdam on 16-17 July. And it was incredibly fun and involving. Let’s tell you more about it.

The most promoted Twitch event ever

Yeah, Twitch wanted to outdo the ComicCon. Marketers began promoting the event in February, and the official announcement was set for the 27th of April. Then it became clear that the event could be held, even though the pandemia wasn’t over yet.

The prices were 65 euros for a one-day ticket and 198 euros for two-day ones. And there was a rule: one ticket for one Twitch channel. All badges and tickets were connected to accounts, so if you didn’t have one, you couldn’t come.

Health measures were pretty strict this year. You weren’t able to visit it without a vaccination certificate or a negative COVID-19 test. Wearing masks wasn’t obligatory for visitors but required when being in a crowd. All exhibition areas were designed to keep a two-meter social distance, and many hand sanitization units were around. Sure, it was impossible to look after all people who came to have fun, but the attendants did their job well.

This year, event organizers also have tightened the entrance rules. Lots of stuff were prohibited to bring with you: drones, pets, full-face masks, aerosol cans, noise-making toys, all types of transport, and many other unexpected things. Bags and backpacks larger than 12″×12″×6″ were not allowed as well. But each participant got branded swag bag, so it was ok.

Any visitor who didn’t comply with the guidelines could be refused admission or asked to leave. Fortunately, there were just a few such cases. Everything went fine.

There are still no official data about the number of visitors. But according to rough estimates, over 30k people visited the event in two days. Moreover, organizers decided not to be penny-wise, inviting over 1,7k content creators: from almost no-name broadcasters, who had a hundred followers, to the most popular and well-known streamers.

People found out about TwitchCon’s comeback in April and were very excited. Cause they wanted to see their beloved streamers in real life. Twitch warmed up their interest in its blog and Twitter account. And, of course, many content makers told their audiences about the upcoming live event. 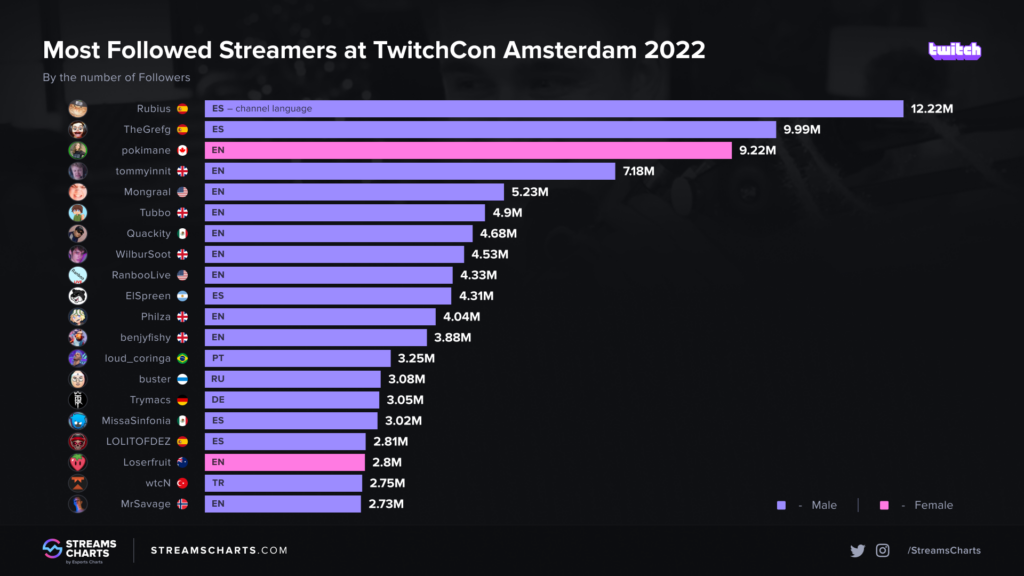 Here are the most followed guys who attended the event — ultimate Twitch stars from all over the world. And you could see there were not just English-speaking content makers, many of them streamed in Spanish, Portuguese, German, French, Turkish, and other languages.

There were tons of interesting and useful content for streamers, but the most exciting events were meetups with famous streamers. Loads of people were waiting for hours to meet and greet their favorite Twitch celebrities.

But unlike different red carpet events, meetups on TwitchCon were warm and lovely. Just like this one:

I was soooooo nervous but holy, I FREAKING MEG @pokimanelol and she’s even cuter and more wholesome IRL 💜🥺

Thank you that you took your time and called me over. #TwitchCon pic.twitter.com/TawZn45FWw

Worth the wait 💕 thank you for this @pokimanelol pic.twitter.com/tqgkGZvLpE

Pokimane (9.2m followers) just moved her fans. And they unexpectedly realized that she was a pretty nice and kind person. Lots of famous streamers tried to interact with an audience as much as possible. Cause seeing a streamer on the screen is different from chatting with him standing side by side. That was a brand new experience for Twitch fans.

Event activities for every taste

TwitchCon showed that the Twitch community wasn’t geeks and nerds but people loving fun and living a full life. RAI Amsterdam having a floor space of 112,200 m² has contained a huge number of festival activities. Here are the most significant ones:

Twitch rivals. It’s the most rated and beloved show on Twitch and about Twitch. And two days of TwitchCon were full of fun competitions and gaming contests. The largest one was Twitch Rivals Ultimate Challenge III: a pretty interesting mix of IRL challenges and gaming competitions.

Some of the contests were very weird, but fun and involving. Just so you understand, imagine two teams trying to build the highest tower made of toys, and the next minute they fight to beat the high score in a random computer game.

The event was 3,5 hours of pure fun and laughter. Not only for streamers who took part in it but for viewers too.

But there were not just odd challenges. Classic Hearthstone, Fortnite, and Minecraft contests were also part of Twitch rivals.

Artists alley. Streamers are not just online creators. Many of them make wares by hand. So TwitchCon created a special place where people could buy some merch or just get something as a memento.

There was almost anything that Twitch fans wanted to buy: branded merch, goods made by streamers themself, souvenirs, badges, even cloth, and backpacks. And paintings, there were lots of paintings. Over 30 popular and a few dozens of less known streamers took place in it.

TwitchCon Cosplay Contest. TwitchCon cannot exist without cosplay. Hundreds of people walked in the images of recognizable characters from anime series and movies.

Over 150 marvelous cosplayers from all over Europe participated in the contest. Judges and viewers had to choose the best ones in the categories: Armor, FX, Larger than work, and Needlework.

Here are some of them in a short video:

And here is the winner. Meet Villina and her Mother of Sanctuary character inspired by Diablo and Warcraft games.

Just wearing this costume took over an hour. And as the cosplayer said, she spent over 700 hours making it. 700 hours, Carl! It’s an absolutely amazing job.

There also were many talented participants who drove the night. The event took just a little bit over 1,5 hours, but it was a pure pleasure for cosplay fans.

Organizers did a really big job, cause there were lots of cool stuff and involving activities, like this robot bartender making shots and cocktails.

Had an awesome double date with @RageDarling and @Anonymirz at the Robo Bar at #TwitchCon. Super small restaurant and watching this robot vendor was so cool!! pic.twitter.com/vYX5hciyYk

Bull riding attraction was among the most popular ones. Hundreds of people wanted to try it and beat the high score. Not everyone succeeded.

There were a bunch of thematic meetups. Some were just meetings of specific communities like Fortnite or Hearthstone ones. But the others were educational. For example, lection on how to use emotions and game mechanics for a stream or how to earn more money advertising goods during streams. We hope that someday GetStream specialists will submit their report on this topic cause we have a lot to say.

And these are just a small number of activities available for TwitchCon visitors. The event went great. It was just satisfying. Thousands of people walked off RAI Amsterdam in the evening — tired but absolutely happy. That’s what such an event should be like.

Up Next
How to start a test stream on Twitch?
How Streamers Made Money on Other people’s content through the Depp and Heard Lawsuit
How To Get Bits On Twitch
Best live streaming apps for gaming
For brands